Power and presence, all compacted into a fantastically fun stallion to ride. 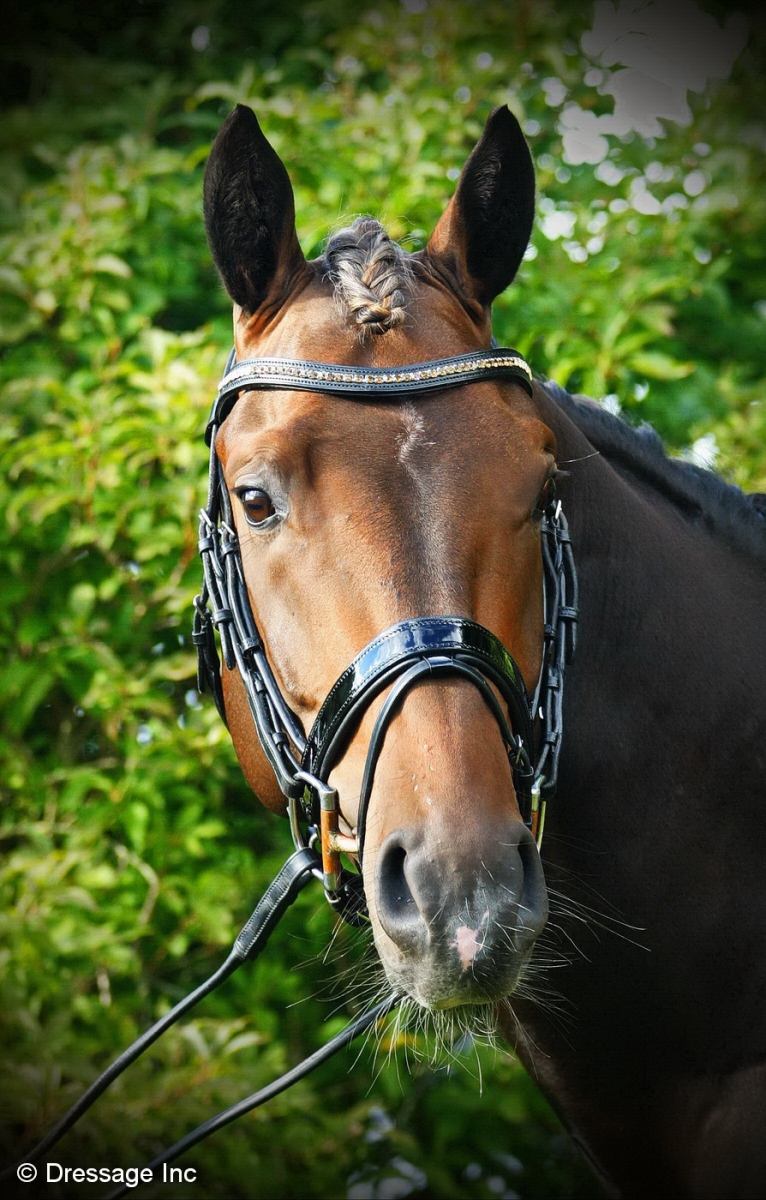 A beautiful stallion with such an exquisitely expressive face, Skyfall is brimming with presence. A rectangular model of warmblood with solid bone, joints and substance, with powerful movement coming from a strong engine behind. Everyone who meets him falls in love with his cheeky affectionate nature and gorgeous face. With the combination of the several Preferent stallions on both the sire and dam side, this makes for a strong dressage pedigree but as a bonus Skyfall can really jump!  He has slowly been trained under saddle to allow him to mature and establish the basics for dressage whilst also doing some jumping over coloured and cross-country fences, Skyfall absolutely loves to jump and is very bold, careful and correct with his technique. He has very good rideability and allows the rider to sit quiet and takes them to the fence, everyone who has ridden him has come away with a big smile and commented on how much fun he is to ride. He is also known for his sensible manner when faced with low flying helicopters and high winds!

Skyfall`s sire is the wonderful Oldenburg licensed and performance tested stallion Santo Hit B (Sandro Hit x Weltruhm x Matcho AA) who has had a convincing dressage career with an extremely high percentage of wins and two regional titles to his name. Now training small tour he shows a super ability to extend and collect and his power and suppleness add real quality to the work. His excellent temperament and attitude make him a pleasure to work with. He was named an improver stallion by the Oldenburg foal inspectors after only his first season as a sire. Santo Hit holds a very convincing competition record from limited outings.  At five years old he confidently qualified for the British Dressage National Championships in the Shearwater Potential International Young horse class with comments on his classy paces. Santo Hit has qualified for every summer and winter regional championships with scores up to 77% and many wins.  He was 4th at his first winter regional championships and also took 4th at the Winter Championships.  The following year saw two regional titles at medium and medium freestyle both on plus 70% scores. Now campaigning at advanced medium with scores over 73% we are hoping to make our advanced debut at the end of 2017 and looking towards PSG for 2018.  He has a super ability to lengthen, sit and collect with power and suppleness and shows a particular talent for piaffe.  His intelligent, trainable brain and loveable nature makes it is an exciting journey to Grand Prix.

2011 saw a filly foal judged to be in the top four of all Oldenburg Foals in the country against the most well-known of German names.  2015 saw Santo Hit’s first licensed stallion son ‘Skyfall’.  Santo Hit is both beautiful and successful himself and but the real excitement and confidence he gives to breeders, is his ability to pass on this beauty to his foals in their talent, temperament and type.  His foals are easy and level headed and are a pleasure to be around, the rideability, bravery and calm temperament that comes through so consistently and dominantly to his offspring make them a pleasure to train and compete.

Santo Hit’s Sire Sandro Hit has shaped modern dressage breeding, producing beautiful uphill types with light footed elegant movement and an enchanting charisma.  Sandro Hit was six-year-old Dressage World Champion and is extremely well presented through him offspring in both breeding and sport, London 2012 saw three direct offspring competing in the Dressage Kur and 2017 WBFSH sees Sandro Hit move into No.2 in the Dressage Sire Rankings, convincing statistics for breeding success. Santo Hit’s Dam Waikiki is by Weltruhm, son of the legendary Weltmeyer.  Weltruhm displayed his high-class talent for dressage when he reigned supreme in the dressage section of his performance test with 144.03 points.  He also carries the added confidence of a dressage breeding index of 145.  Great grand sire, the refinement stallion Matcho AA, winner of his performance test out of 39 participants, is known for bringing good rideability, refinement, talent for dressage but also a talent for show jumping to the equation.

Skyfall`s dam is the beautiful Distella (Domino Van T’Heike (Ferro) x Dominard) who remains with us as a highly valuable breeding mare and both of her first 2 offspring are licensed stallions (Horizon and Skyfall). She is graded Oldenburg and is very powerful and uphill in her movement. Her sire is Domino Van`t Heike, who at the age of four became Belgian Champion Merksplas and the following year reserve Brabants Champion and Reserve Champion in the Dutch Championships class M2. He also won several times in the Z1. During summer 2009, he was sixth on the Brabants Championship and Dutch Championship; he finished fifth in the class Z1. Winter 2009/2010 Domino won each selection circle and became champion. Domino `t Heike is an offspring of the highly successful Grand Prix stallion Olympic Ferro. An equine super star, Ferro is the legendary forefather of Olympic champions and is one of the KWPN verband’s foundation stallions, having sired more than ten licensed sons, of which Kennedy, Rousseau, Rhodium, Metall (sire of Utopia) and Negro (sire of Valegro) are the most famous. Romina Van`t Heike is the mother of Domino, she is a daughter of the Grand Prix stallion Welt Hit II and elite mare Hinde (v. Wendekreis).